Well hello there! How are you all on this wonderful Friday?  Sooooo this lovely lady Juliet is hosting a very inspiring blog hop party... you may have come across it in the last couple of weeks, no?

If you've missed the amazing crafty goodness that's been sent to inspire us all - head on over right now and check it out.  Seriously, there is something for everyone and all of them awesome!  And while you're at it, get your craft on to link up at the end... next week! There are prizes people!

So today it's my turn - oh the pressure!! I have been juggling and testing a number of different ideas but none of them have pleased me terribly... So I'm presenting to you one that has worked and has been serving us very well for the last couple of weeks... wheatbags! 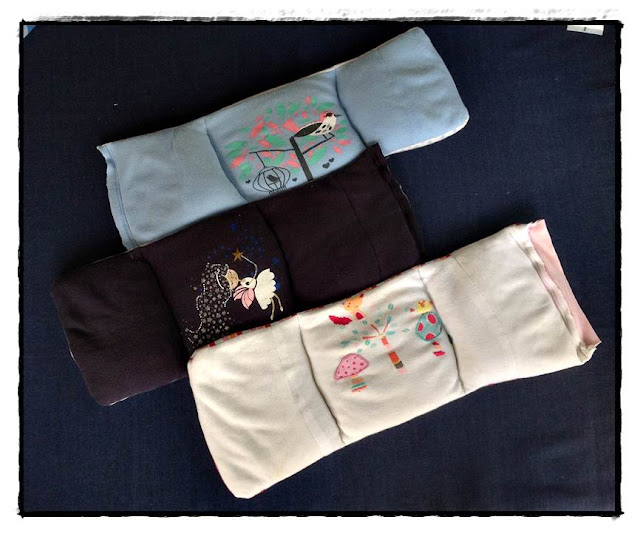 I've kept heaps of the girls old clothes for future use... even the battered and bruised ones.  We loved these pj's from last year but seriously - they lasted one season - stretched beyond salvation, holes in the knees, and very worn and thin (i know... after One season - not ideal)... 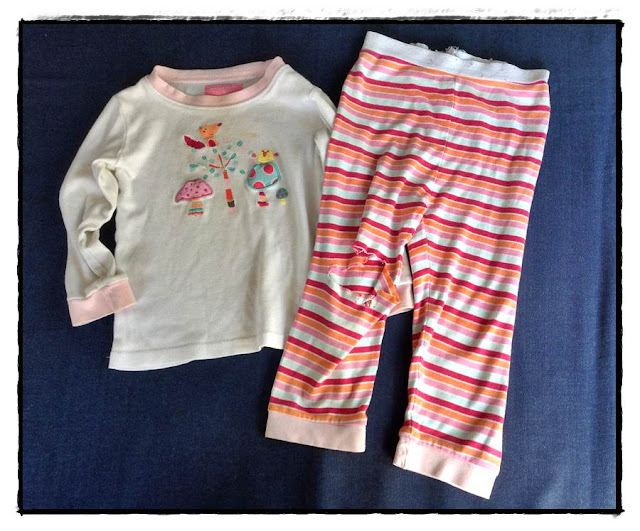 It's been a bit cold lately - yeah I know, newsflash! - and the girls have been enjoying using hubby and my wheaties... Lightbulb! Old pj's + wheat =  personalised wheatbags! 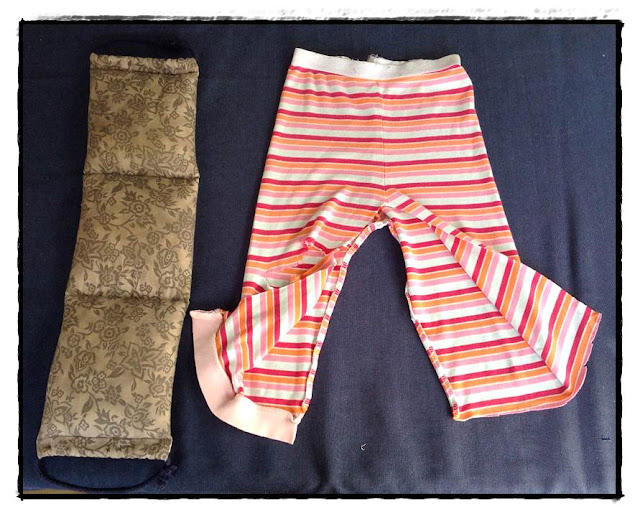 As mentioned before they were holey and very worn so they are double layered.  My wheatbag was used as guide for size, and clothes were cut up to roughly fit the required dimensions.  There's probably no need to explain how to do this as it will vary depending on the size of the clothes or fabric you're using. 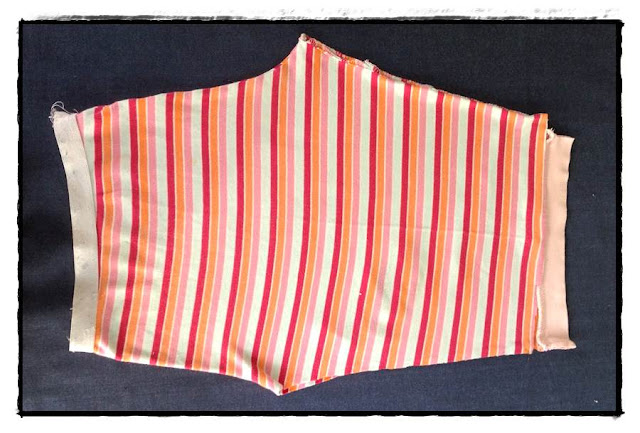 One pant equaled one side (double layered of course).  And the ribbing on one leg bottom remained on to add some "cuteness" at the end. 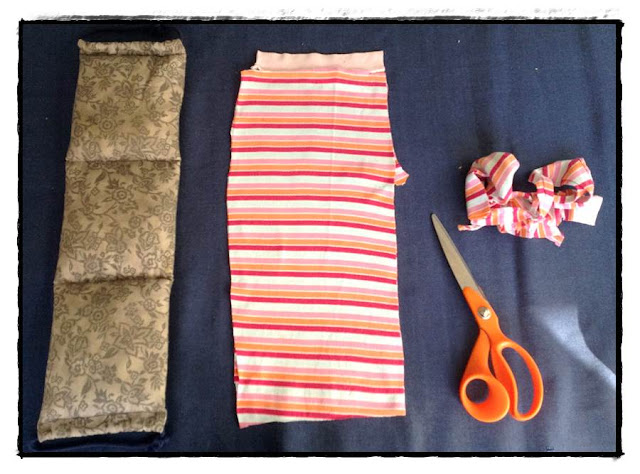 The top was a little different, but all seams were unpicked and sections laid out. 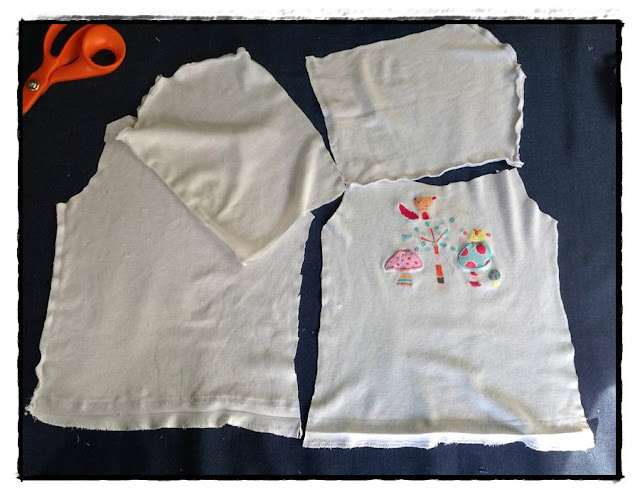 The picture needed to be front and center so extra bits were added to each end to make up the required length.

We end up with two fronts and two backs... and see that wee patch? It covered one of the initial knee holes in the pants. 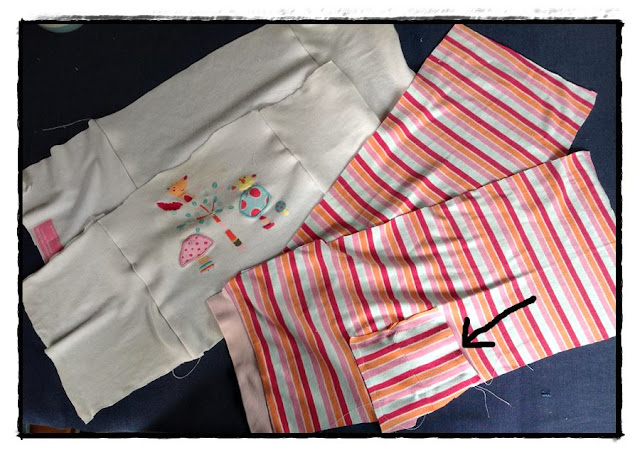 Now layer them right sides together.  The two middle layers should be the two pieces you want displayed on the outside when it's all done.  Sew the layers together around 3 of the sides. 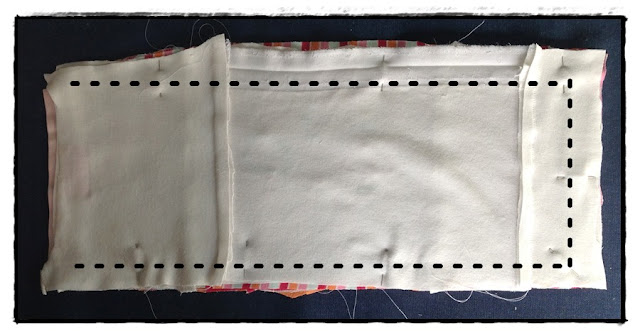 You'll note that none of the panels are perfectly rectangular as we'll trim the excess off after we've sewn the sides together.  Once you've sewn and trimmed the edges, turn it inside out.  (The leg ribbing was at the open end otherwise it would have ended up inside the bag once turned out.)

We like out wheaties sectioned and they contain about 1kg of wheat in total.  In this example we have 3 sections and each section is filled with about 300grams of wheat.

Next you sew the first filled section "closed".  Now I'm sure there's an easier way to do it, but.... Roughly determine a third of the way and pin it closed about 1/2" from where you will be sewing.  This makes sure the bulk of the section doesn't interfere with you trying to sew a line from end to end.  Use lots of pins so the little suckers don't escape and get in your way. 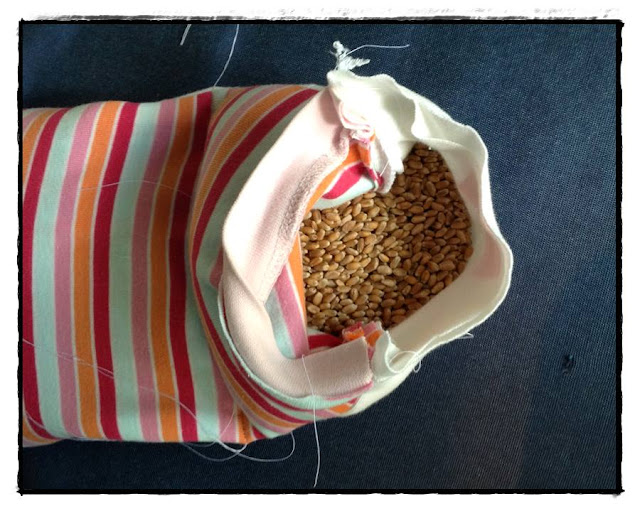 Repeat for the middle & last sections.  Fill each with a third of wheat, pin, and sew. 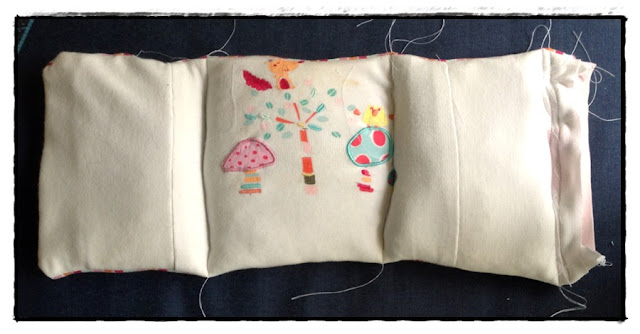 There are two lines at the end bit on this example as my machine would not have forgiven me if I were to turn the edges in and sew them shut neatly...(8 layers...).  So trim off the sticky out bits at the end, tie-off and tidy up all the threads and you're done!  PS: you'll note I didn't cut off the initial leg ribbing when tidying up the ends as it was there to add some character in the first place  : ) 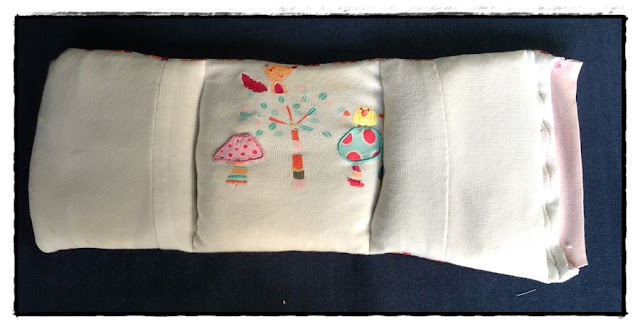 They have been used every single day since and only take about 1.5-2 minutes to heat in the microwave.  Toasty and warm and snuggly....and recycled and personalised!

So hopefully that made sense and inspires you to make some wheaties of your own!  They are super simple really and don't need to be nearly as "complicated" as mine!  Two layers of fabric, sew right sides together around 3 sides, fill with wheat (or rice), sew open ends shut and whala!

Make sure you check out the talented people lined up for next week, and in the meantime get your winter craft on so you can link up on Wednesday!