Yes yes, yet another "look what I made" post... : )  I will sometime, soonish I think, write about something other than fabric and a sewing machine... : )

In the meantime I give you: Bunting. 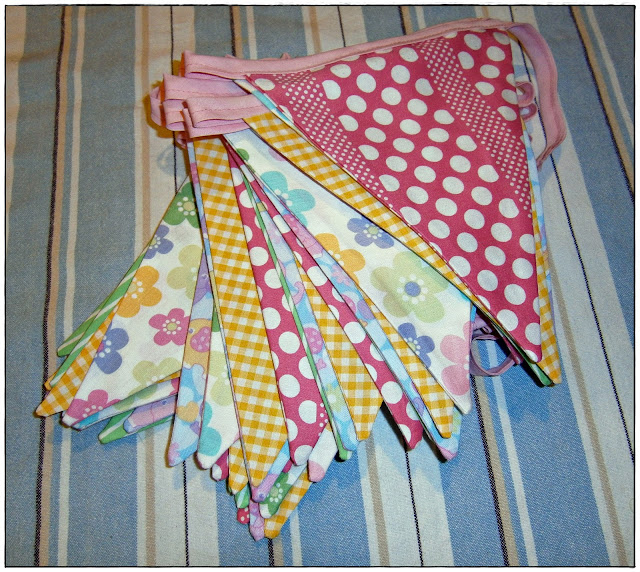 I LOVE bunting.  I NEED to make more for my own girls - geez, even for the kitchen, the bathroom, for the heck of it! No seriously though - I do want to make some more for my home... sometime soon.  Of course this 10metre strip of double sided bunting (50 "flags" in total) is not for us... yup, another Christmas gift for a little girl!

I'm still to deliver the good in terms of a tutorial for the Dino's but here is a tutorial for my bunting.  Incase anyone needs it : )  As mentioned these are double sided and I chose to make it really long so it can be hung all around the room, zig-zagged across a ceiling, or whatever takes their fancy.

Cut out a template at the size you would like your bunting to be,  Adding on about 5mm to the edges to allow for the seams.  My template was: 17.5 cm across the top, 23cm along each side and from top middle to point: 21cm. 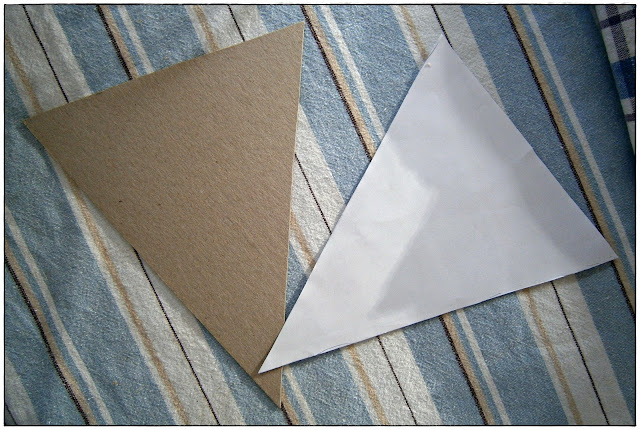 Use your template to measure and cut out the amount of flags you desire.  To save time, fold the fabric over (you could pin it to stop it from moving around) and cut both sides at the same time. 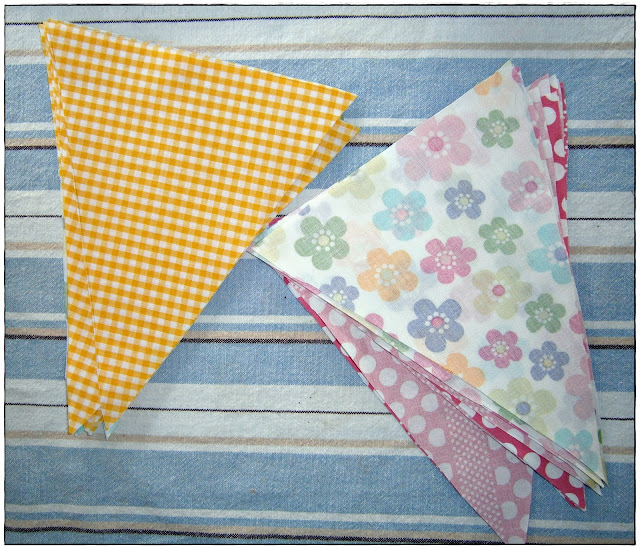 With right sides together sew each flag around the angled sides.  When you reach the point, keep the needle in the fabric and turn it to go back up the other side ensuring the stitching is therefore continuous. 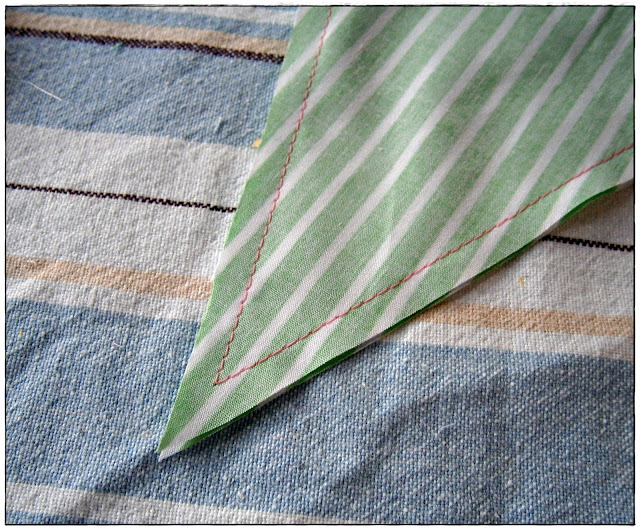 When you reach the end of the second side of the flag, save time, thread and effort by sewing a couple of stitches without fabric before sending in the next one. 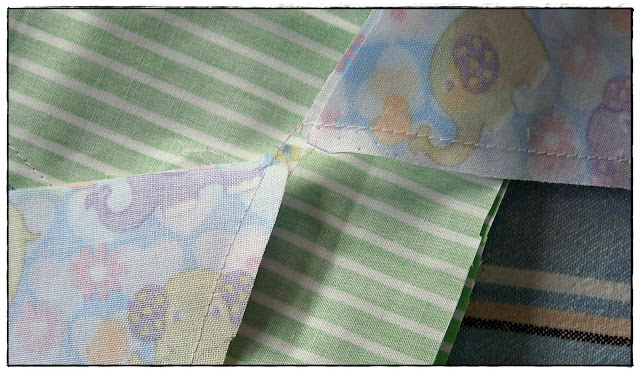 You'll end up with a whole chain all done in one go! 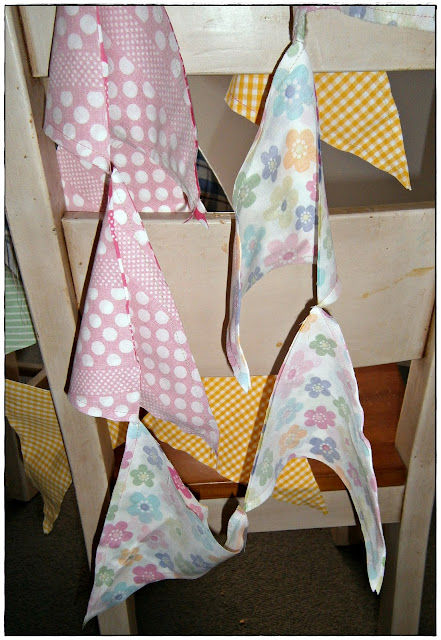 Now cut them all loose from each other by snipping the thread between them.  Trim back the point, and I also found I got better results if I trimmed the seams along the sides back just a little way up.  Less bunching that makes for a nice point once we turn them inside out. I use a leadless bic pencil to help achieve a nice point. 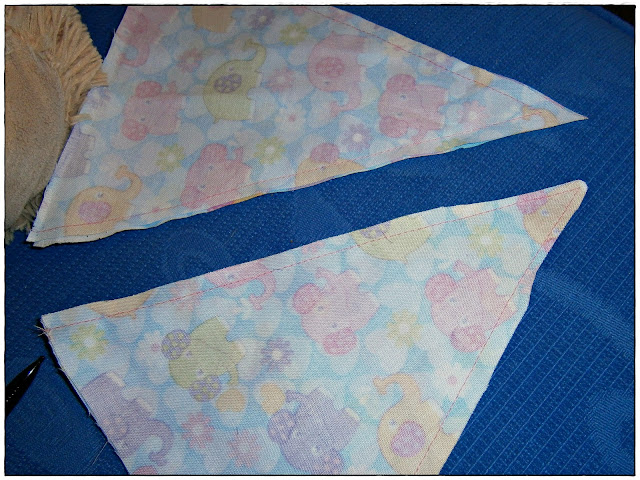 Once they've all been turned, we need to iron them.  It will help to insert your template and iron with whilst it's in to get the seams even and flat. 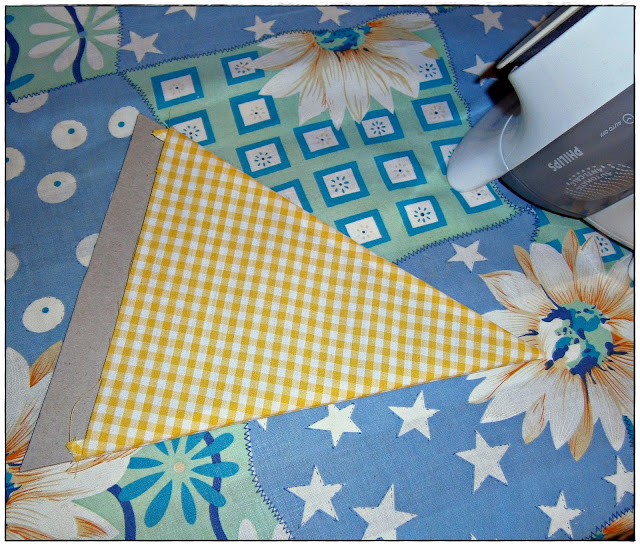 Trim back the corners at the top edges to get a straight and clean edge along the tops. 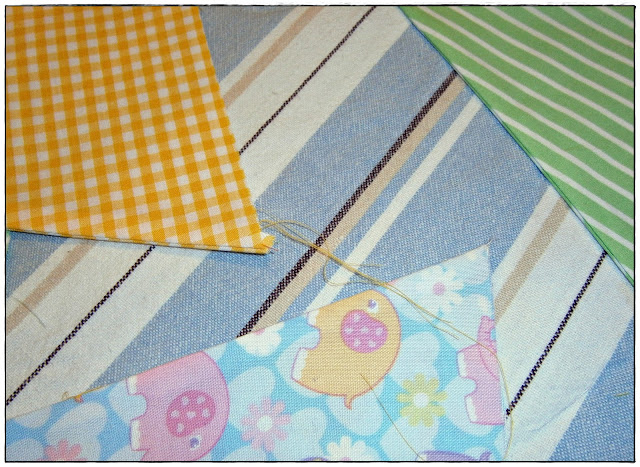 I used some bias binding for the "string" part, folded in half.  Pop the flags in the fold and sew along the edges.  It's up to you if you want gaps or none, and if so how far apart.  I used the metal plate of my sewing machine as a guide.  Once I reached the end of one flag the other one was slotted in to start at the edge of the metal plate.  Leave about 10cm or however much you see fit at each end (should be enough to tie the bunting to it's hanging space when it's done).  Of course include these ends when you sew the strip and double back over tidied, folded ends. 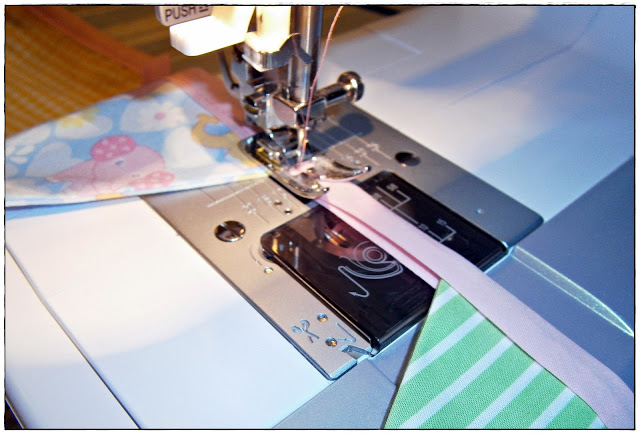 Tada! You're done.  Now go hang it up and enjoy!

Email ThisBlogThis!Share to TwitterShare to FacebookShare to Pinterest
Labels: sewing

Say Hi to the Dinosaur Tribe... 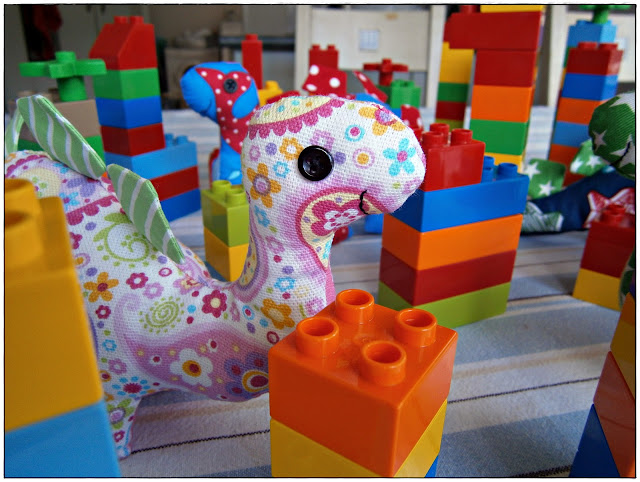 I whipped these guys up in a day based on what I saw here http://littleblackteapot.blogspot.com/2011/05/stuffed-dinosaur-with-sewing-pattern.html. 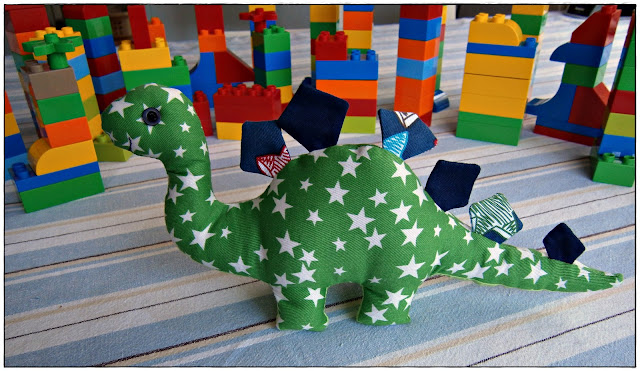 Mine ended up a little different as I struggled with some aspects of the pattern... they still turned out ok!  Again more gifts for more children - these ones are headed over to my nephews and niece and another who will make his/her appearance next year : )

I will put up a tutorial and amended pattern of how these guys were made later on!

Linking up with crafty folks here.
Posted by Leonie at 21:54 9 comments:

Hubby's Grandmother has a birthday coming up later this month... and I've been racking what used to be a fully-functioning brain, for a suitable gift...

So as I'm in a home-made gift making phase and given that she's from Holland I started searching for Dutchy things that I could perhaps give a go... Pinterest provided a suitable idea... a Dutch pinwheel...  I wasn't going to attempt anything as elaborate as a whole quilt so I decided on a suitable smaller option - a cushion cover. 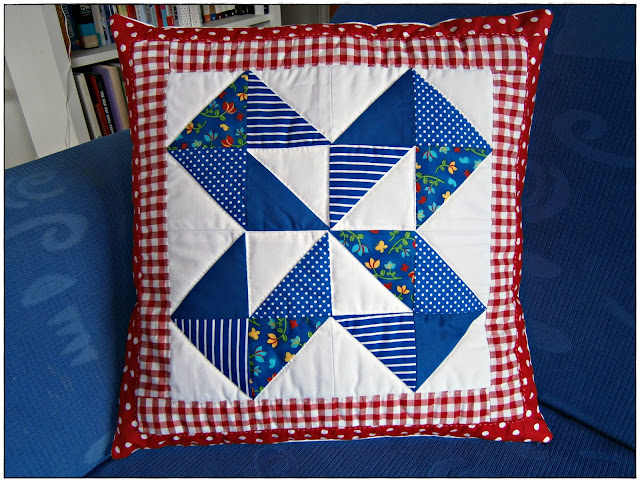 I searched good old TradeMe for some cushion inners and found some brand new ones for $4 each.  Armed with my new cushion inner and it's dimensions I set to work.

First some planning: Very high tech as you can see.  I'd decided to made a double border around the edge so working out sizes was fairly simple.  Of course I just added on an extra centimetre on all sides for the seams. 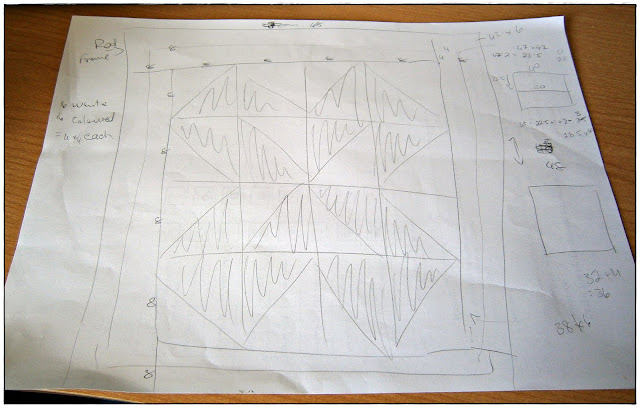 The Pinwheel would require 32 squares.  16 white and 16 coloured.  As for the colours, patterns, etc, anything goes.  I have seen some that don't have the white "background".  Some people do the pinwheel as one fabric type/pattern/design, some mix it up, some have four different covered "blades", each to their own.  As I'm trying to keep with the Dutch theme I decided to make the pinwheel predominantly blue and have a red border.  Again I used leftover fabric from my stash.  I measured and cut out 16 white squares and 16 blue (4 of each different blue pattern). 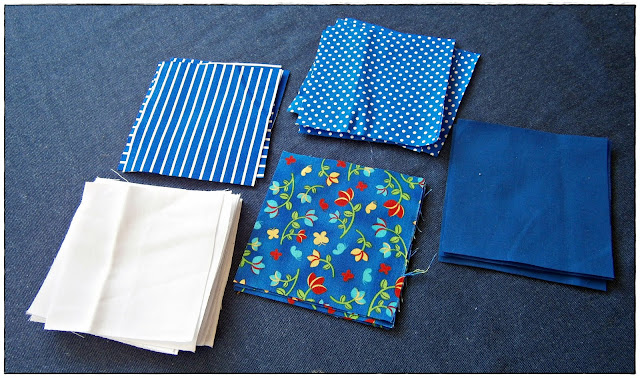 We match up one coloured square with a white one.  Then draw a line from one corner to another diagonally and sew on this line with the right sides together.  You'll end up with 16 joined squares. 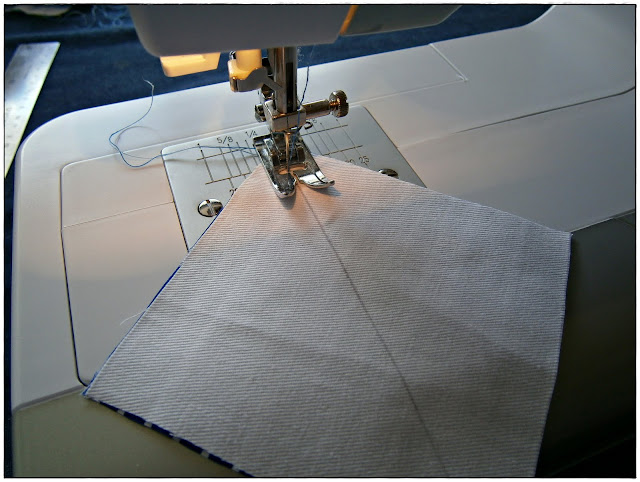 Next, cut along one side of your sewed line to create a seam of about 1cm. 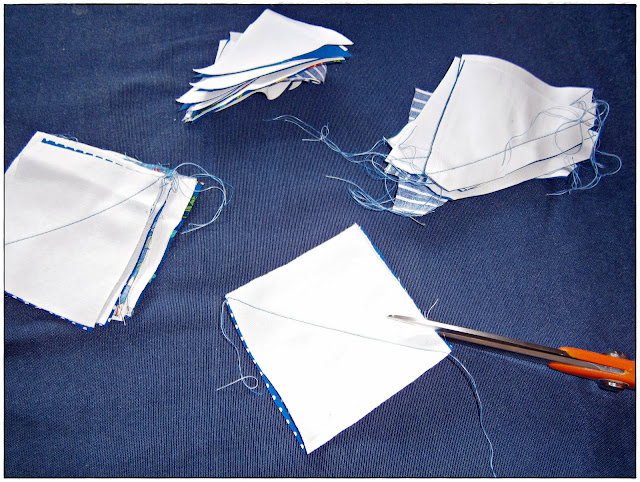 Fold open and press.  If you are using white it is suggested to press the seam to the coloured side so it doesn't show through the front. 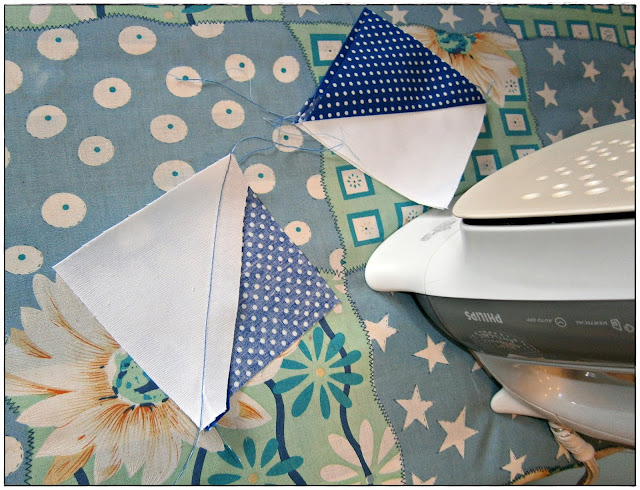 Lay the squares out in the pinwheel pattern. 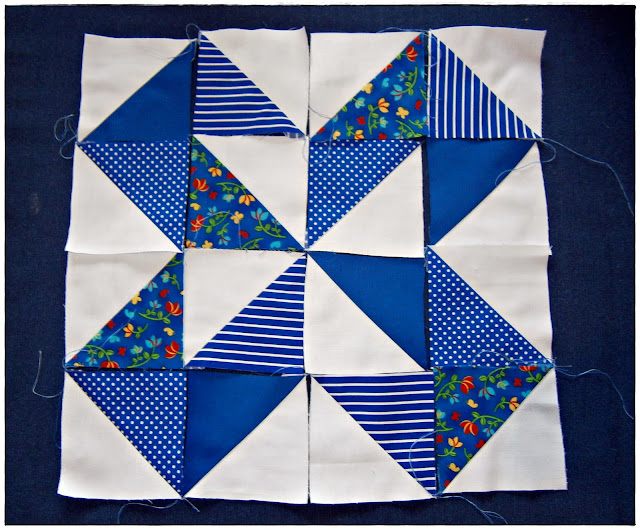 Sew the blocks together, line by line.  Then sew the 4 lines together. 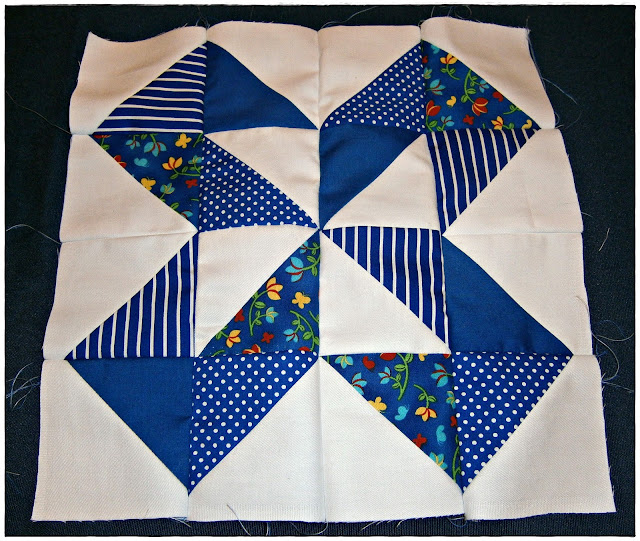 I then added the first of the borders around the outside. 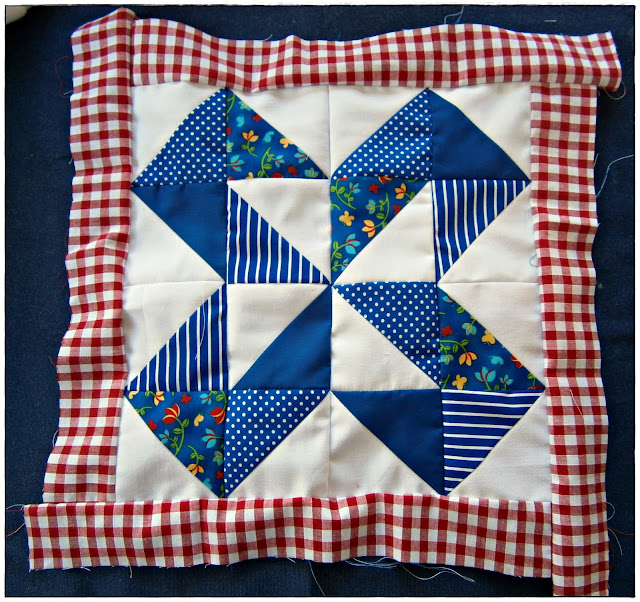 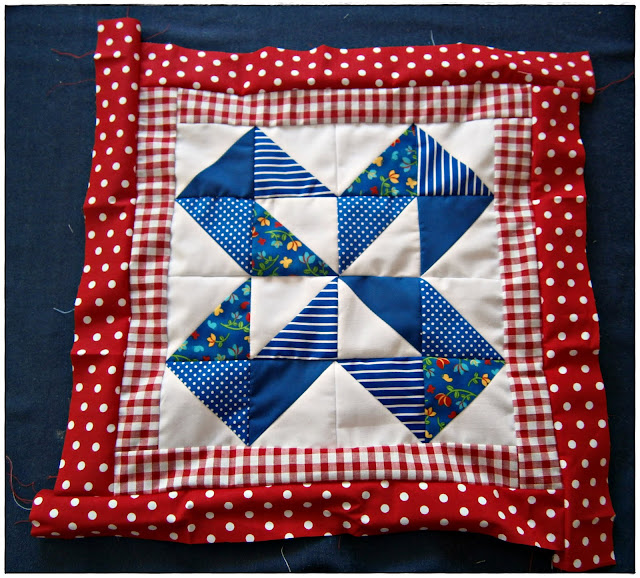 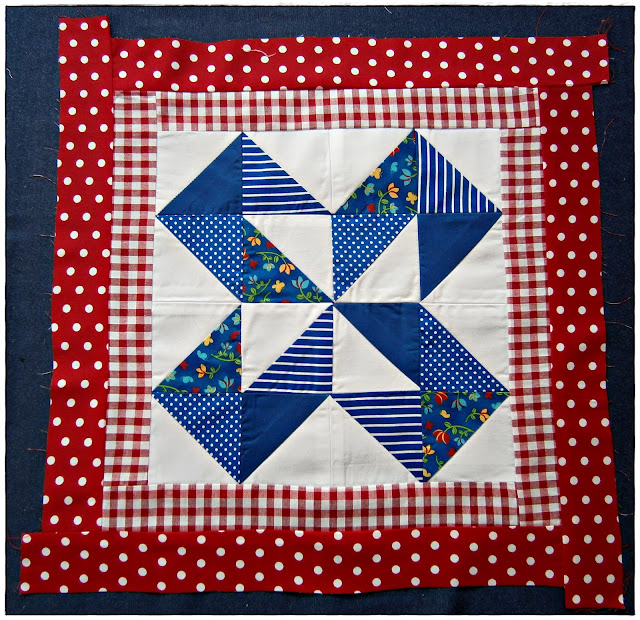 I wanted to quilt it to give the borders some definition.  I got some batting and quilters cotton, then hand-quilted (I'm yet to get a foot for my sewing machine to do this) around the edges  (sorry I completely forgot to take pictures...) Again this is about personal preference.  Many people do a full-blown quilting job, others do nothing, and some do different elements.

The quilters cotton is slightly waxed and therefore goes through the 3 layers more easily.  A small sharp needle and a simple running stitch is all that is required for the quilting... and a little time.  The quilting took longer than the rest of it combined but was fun and a bit new being the first time I've attempted anything like it! 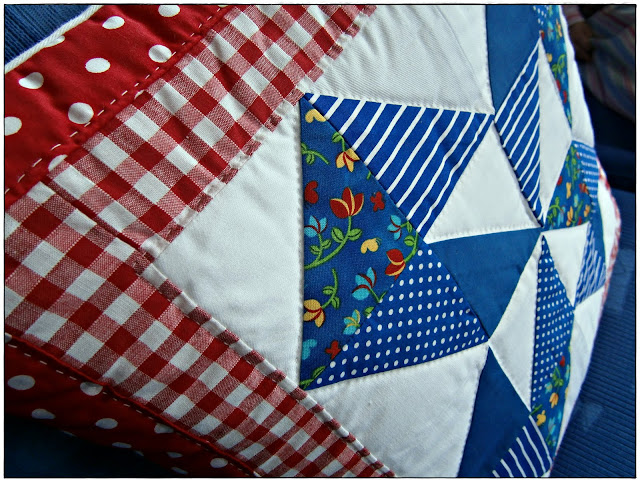 Next came whipping up a simple envelope back.  Two pieces of fabric both cut to the right width, but to about 2/3rd's in length/height to allow them to overlap sufficiently. Also, allow a bit extra to hem the visible edges.  (I didn't have quite enough to make two large pieces which is why one side is joined down the middle...)  And I would strongly suggest remembering to press the two pieces before pinning and sewing, rather than afterwards!

Measure, cut, hem, pin the two back pieces to the front (right sides together) and sew the outside edges together. I doubled back over the opening edges for extra strength (when inserting and removing the cushion over time). 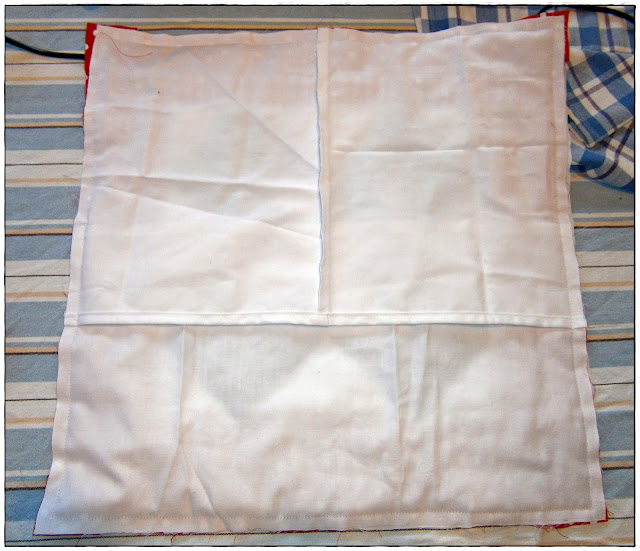 Trim the corners back, turn the cover inside out, I used a bic pencil without the lead to help push the corners out properly, pop the cushion in and voila! 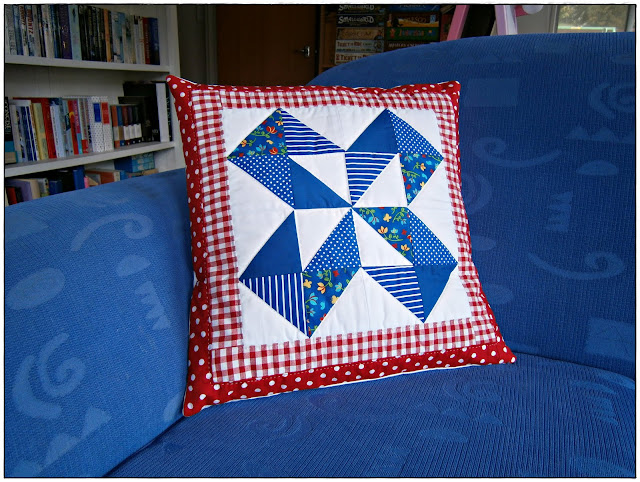 One birthday cushion to be dispatched South shortly!
Hopefully that wasn't too wordy and you're still with me!

Have a happy week!
xx