I give you: the new highchair cover: 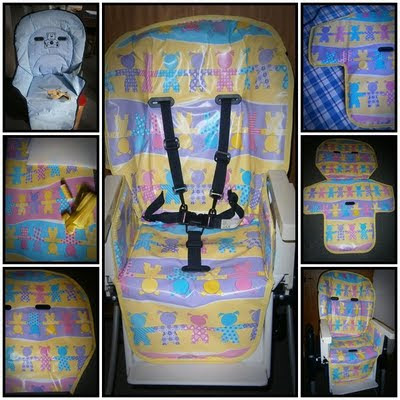 Some aspects were a little tricky - like trying to convince the sewing machine it was okay to sew through the vinyl and foam and not have a hissy fit about it because I think I know what I'm doing...

Basically I cut the old one up into two sections, pulled what was left of them further apart and then used the originals as blue prints to cut out the new shapes.  I replaced the old/non-existent foam with some new ones (two skinny layers glued together) and then cut to shape, allowing enough room around the edges for the binding.  The machine really didn't like sewing through the foam (I had to do this twice where I had to cut wee holes for the straps to come through at the waist) so best to avoid that if you can by keeping it away from the edges.  Then I just dotted some glue between vinyl and foam to hold it all together (and nearly fainted when the glue softened the vinyl and made wee marks on it... luckily only temporarily until it dried out fully...).  I'd strongly recommend pinning the binding to the edges as much as you can... it looks like you could do it on the go (as working with that rather unbending and large object seemed like it would be simple) but alas... pin it - you'll save yourself a lot of frustration.

Then add the bottom to the top and ta-da!

I could go further and replace the straps with something in similar colours to the new cover, however the "clips" holding the cover to the seat on the back and bottom are still navy blue so...  However, we'll see if the OCD in me wins in the next few months!  Liezel still has a few months before needing to use it so there's time!

Now I'll focus on my book and then work out some new goals!
Have a good weekend!
Sleep tight
x